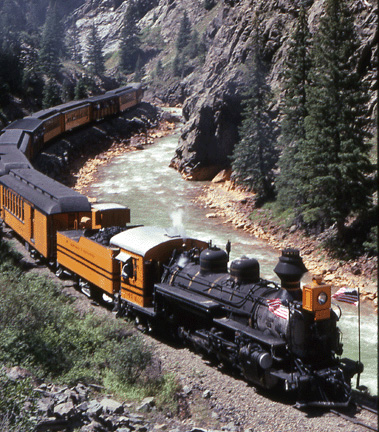 The ‘Bumblebee’ steaming past Burkes Curve.

THE IRON HORSE first found Silverton in July 1882. This remote mining camp had grown for ten years when it attracted the attentions of General William Palmer and his narrow gauge Denver & Rio Grande Railroad. It was nigh unto 500 mountainous miles from Denver and none more rugged than the last thirty-six to Silverton where the spectacular Canyon of The River of Lost Souls was audaciously threaded with serpentine steel. This link to the outside world turned the roaring camp into a full-blown and brazen mining town of renown

Mines expanded. Population and production mushroomed. As miners and merchants and madams rode the rails in, so the silver rode out to New Orleans and other distant mints. It was a grand celebration which lasted eleven years. Then in 1893 the U.S. Treasury stopped buying silver. There were sad days in Silverton and the San Juans. Mines were shutting down. Businesses were boarding up. More carloads of people than carloads of ore left town.

But Silverton was beginning its still ongoing demonstration that Silverton will not die—there will be another way.

I catch my toe on a rock and pitch forward and out towards that steep cliff with the roaring stream below, which I cannot see but know is near. This misstep fortunately brings me back into the uncomfortable reality of the moment before I soar over the edge, both of granite and of sanity.

Mining began to adjust its priorities and methods. Gold—always an important player—moved to the fore, and other less precious metals “once shunned, now shined.” Less labor intensive processes and electricity helped.

Though the changes were painful—Silverton prospered again. But multiple tonnage trains of silver ore daily and Pullman trains through to Denver were of the past. In time, Silverton train service became “The Silverton Mixed”—a daily freight train with a dusty coach attached. Trucks on improving highways were stealing business away. At the end of World War II the railroad’s future looked grim.

But Silverton’s silver lining shone again. Several movie producers were lured into the area and the scenic treasures of the San Juan Mountains as seen from the rails along The River of Lost Souls were discovered by the previously unaware public. While Rio Grande management prepared to abandon the railroad, the coach of the Silverton Mixed suddenly became crowded.

A second coach was added. It too overflowed.

Out of all this came the concept of a “Tourist Train.”

Rio Grande management was underwhelmed to the hilt. They had standard gauge tonnage to move through Denver. “Abandon the damned narrow gauge and be done with it.”

Incredibly a few exceptional people prevailed. The management begrudgingly and incongruously agreed to the operation of an “experimental” tourist train—three days each week—until it disproved itself. Engine 473—a veteran of the San Juan Express—was extravagantly outfitted and painted for the “experiment.” In the spirit of her supporters her train was painted gold.

On June 18, 1950, The 473 took “The Silverton Train” to Silverton. In 1951, The 476 and The 478 came to help with growing loads. For the next thirty years The Silverton grew while enduring floods and fires and continuing management contempt.

In 1981 Mr. Charles Bradshaw saved The Silverton from The Rio Grande. The Durango & Silverton was born and subsequent improvements were nothing short of incredible. At season’s peak, seven engines now support four trains per day and attract a quarter million supporters each year

For she is—after all . . . The First Lady of The Silverton Train.