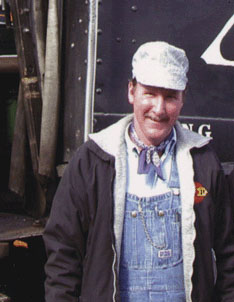 MIKE NICHOLS IS LIVING A DREAM he didn’t even think was attainable. “I was just eight years old when steam disappeared from the main line in this country,” he said. “Never in my wildest dreams did I think I’d be able to become a steam locomotive engineer.”

But he did, and he is. Mike has been with the Durango & Silverton Railroad for fifteen years, operating steam locomotives for them since he was promoted to engineer in 1996. “I love steam engines,” he said. “That’s what brought me here, and that’s what will keep me here.”

There are only about 200 working steam locomotive engineers in the United States today. But back when Mike was a kid, steam was a way of life, and railroading was in his family’s blood. His grandfather and father were both steam locomotive engineers. Mike’s grandfather worked for the Rock Island in Kansas (and was killed in a train wreck there). His father moved to California in 1940 and hired on with the Southern Pacific (SP) where he stayed for the remainder of his railroad career.

Mike Nichols “Some of my earliest memories are going with my dad on the 10th and the 25th of the month, payday, to pick up his check,” Mike said. “Dad was a fireman then. Invariably, he’d boost me up in the cab of some steam engine that was just sitting around. I’d look up in awe at those things, at all those gauges and valves, and listen to them gently hissing, making, all those subtle noises.”

Mike’s father was promoted to engineer in 1951. “In those days it took longer to get promoted,” Mike says. 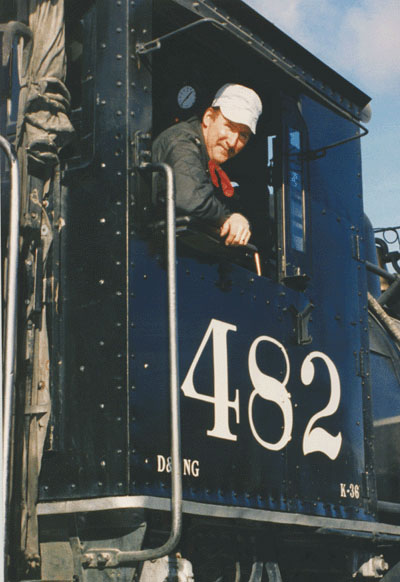 Engineer, Mike Nichols in the cab of the 482.

Fourteen years later, in 1968, Mike followed family tradition. He began as a switchman on the Western Pacific (WP), but was drafted. After two years in the Army, he came back to the WP, then hired on with SP, where his dad had worked, Mike was promoted to engineer in June of 1972, twenty years after his dad made it. “I’ve never really wanted to do anything else!” Mike declares.

Meanwhile, Mike’s younger brother, Kendall, became an engineer as well. He, too, started out with the SP and now works for the Portland and Western, a short line that took over many SP and Burlington Northern branch lines in Oregon.

Mike stayed with the SP until 1994, living in Berkeley, San Jose, and Walnut Creek. But Mike and Liz (his wife) really wanted to get out of California. “We started looking at various places and visited Durango for the first time in June of 1987.” Mike needed a railroad. Liz, who is a nurse, needed a medical center. What they found was beyond their wildest dreams.

Mike found steam! And now he is operating a steam locomotive on one of the few lines left that run them. Since 1882, the line to Silverton has always operated with steam. In 1981 it was reorganized as the Durango & Silverton, and today it hauls tourists rather than ore and supplies to and from Silverton. Its string of bright gold cars trailing behind a huffing, puffing, steaming locomotive is a familiar sight.

Look closely as the train steams past. That smiling engineer waving to you from the cab just might be Mike Nichols.

*Mike Nichols has now retired from the Durago & Silverton NG RR. He lives in Oregon. But he’s still chasing trains!