JEFF SAYS:  “A man who loves his job never has to work a day in his life.” Maybe so. Certainly so for him, because from the first day he saw a train down at Durango’s old D&RG yards to the day he painted or operated one of the steam engines to run on that old line, Jeff is a non-working, hard-working happy man.

Quite simply, he loves the railroad. And has since he was a boy. 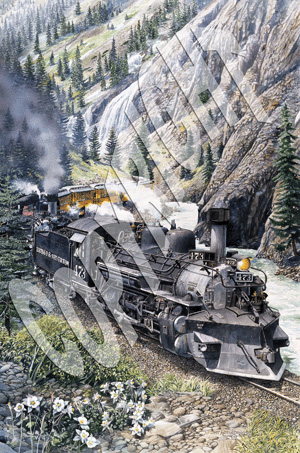 It was 1970 when Jeff first encountered the railroad. He was 11 years old. “I’d hear the whistle on 32nd Street,” he recalls, “jump on my ten speed, and ride on over to 10th Street” (near where they lived—his father was a professor at Fort Lewis College at the time.) “I’d sneak down and scope out the yard… have it all to myself when nobody else was there. There’s something about an abandoned railroad yard. All the old engines just sitting there, not steamed up… just waiting. There was a lot of special energy there.”

The call of the railroad stayed with him. He grew up, went to college, studied art in Denver, received an associates degree from the Colorado Institute of Art, then worked for a while doing architectural drafting. Jeff was good at it, but the job wasn’t good enough for him. That melodic, mesmerizing sound of that steam whistle lingered, and he soon grew homesick for Durango and its narrow gauge railroad.

In 1982 Jeff came home, married, and was working again as a graphic artist when the imminent birth of his first child demanded he get a more dependable job. The railroad was hiring and he hired on. Initially, his career with the Durango and Silverton Narrow Gauge Railroad was less than salubrious. Jeff began as a car cleaner. A few months later a spot opened up in the car shop, and there he remained, painting cars and locomotives, for 18 years. Which he still does. “It’s been 24 years, now,” he says, and not a day goes by that I don’t realize how much I love my job.”

It’s a job that has changed over the years, those changes more than meeting his hopes and expectations. Today Jeff not only paints locomotives, he operates them. Already working as a fireman and conductor, he’s about to complete his engineer’s credential as well. Whatever task he’s given, “I’m just grateful to be able to work with the railroad,” he says.

And now, he paints it as well. “Painting started out as a kind of second job,” Jeff explains. “I was a single parent and needed extra income but didn’t want to be away from home and my kids.” So he drew on his artistic background and started taking commission work as a railroad watercolor artist. 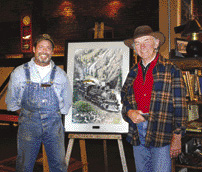 The result was extraordinary. Jeff’s paintings are incredibly detailed and sincerely imbued with his love of railroading and his appreciation of the history where his beloved railroad operates. As buyers of his paintings shared his work with others, word of his talent spread and commissions kept coming. When the Durango and Silverton Museum (of which he is now the curator) opened ten years ago, he began showing his work there. “People just liked my work, I guess,” he says. “It kind of surprises me, but it’s very nice.”

Nice‑there’s an understatement. Jeff Ellingson’s work is intricate, flawlessly executed, and without doubt wholly heart-felt. He is a consummate artist who truly loves railroads, and it shows in every stroke of his brush, scoop of coal thrown into the firebox, and steady hand on the throttle of his beloved steam locomotives