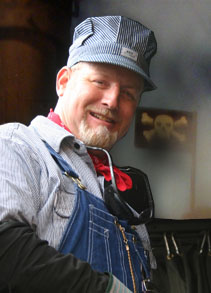 WHEN THE COLLEY family takes a vacation, it’s usually train-related and often includes Disneyland. Let me tell you why. And in the telling, you’ll see why Bill Colley, senior engineer for the Durango & Silverton Narrow Gauge Railroad is, truly: the Hollywood Hoghead.

Colley grew up a train buff, although no one else in his family, mostly Trekies, had any interest in railroads. He loved movies, especially those with John Wayne, who lived just up the street from his family in Newport Beach, and anything by Walt Disney. Colley got to combine both loves, when he went to work for Disneyland, five of those years with Retlaw Enterprises, a company Walt personally owned which owned and maintained the steam trains and monorail attractions. “I was a conductor on the train, and right before I left, night closing conductor on the steam train,” Colley says. He also worked on monorails as operator, and the Steam Trains attraction and aspired to help with Disney’s “Pirates,” a particular favorite. Since coming to the Durango & Silverton, Colley has run five trains for movie productions… not surprisingly, all Disney movies. “Now we need to do one for ‘Pirates of the Caribbean,” he says. “A nice night shot, pirate flags flying. And me running the train, of course!” 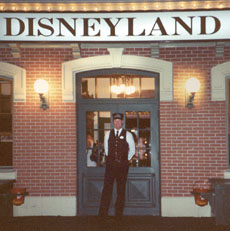 But wait! The Fantasyland connection goes even deeper. Even before Disney, Colley did a one-year stint at Knotts Berry Farm, “working D&RGW and RGS equipment they had there. I was engineer,” he notes, “running the D&RG W K27 464, and D&RGW C19 340, RGS C19 #41, RGS Goose No. 3. It happened because, while I was runnin’ the 19” gauge steam locomotive at Orange County Fairgrounds, these guys saw me and said, ‘Hey Knotts needs engineers, and they’re hiring.’” Colley also ran the locomotive for the California Western Skunk Train, steam locomotive #45, a dream he’d had since he was a boy, an assignment from the present owners of the D&S when they took over that railroad during its financial meltdown.

So, how did Colley become the senior engineer for the D&S, and get to run trains making movies? He followed his heart and came to Durango in December, 1980, hoping to get hired on by the railroad. “Bradshaw” – the then-owner -”kinda knew me,” Colley says. Which helped. He got the job, began as a car man, graduated to engine watchman, and his first summer, fireman on a Helper for a Double Header. In 1995, he was promoted to engineer, and 11 years later, to senior engineer, a position he really loves.

“I think I really got it right this time,” Colley says. “If you believe in reincarnation, I’m not coming back, everything has come together in this lifetime, I’ve made good choices, I picked Kris, my wife, my kids are fantastic, I’m doing what I was meant to do, What I love to do!”

A word about romance and railroads. Colley met his wife, Kris, on the D&S where she was the concessions person. “Hey, can you imagine that?” he laughs. “She was from Huntington Beach; I was from Newport Beach, and there we both were, working for the train.” In his years working for the railroad, Colley, and his best friend Mike Nichols  have married people and stood witness for marriages on the train.

“A steam locomotive is a beautiful piece of machinery!” Colley believes. Although he best likes that machinery in motion, he enjoys modeling it as well. For a brief two-year period, Colley owned a model train store in Irvine, California. Where he was fortunate enough to meet famed railroad photographer, Richard Steinheimer, who later came out to Durango ride the train and visit with Colley and Mike. “Steinheimer came down to the railyard one night,” Colley recalls, “when the 480 was out. Mike and I tried to position ourselves to recreate his famous photo of the Southern Pacific at Saugus, Calif. It came out really great!” Colley was also called upon by the Disney family to create the model display likeness of a train Walt Disney worked on as a “news butch” when he was about 15 years old. “It is one of the neatest things I’ve ever worked on,” he says. “I’m actually in the credits for the museum!”

Now all that remains to make a perfect memory of a very perfect career is for Disney to call upon the Hollywood Hoghead to do “Pirates” movie with Colley at the throttle and the pirate flags flying.