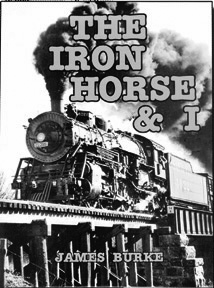 The Iron Horse & I
Growing Up With Steam

THE IRON HORSE & I, Volumes I and II, by James Burke, is a collection of photographs taken by the author and an account of his experiences and impressions made on him by the trains he photographed and the railroad employees he met.

Both volumes are hardbound 8-1/2 X 11″ books. Volume I is approximately 500 pages with about 450 photographs, while Volume II consists of approximately 250 pages and 175 photographs. All photography is black and white.

The books have been prepared with one page of photographs adjacent to a page of narration. The narrative includes not only a description of the locomotives and trains shown on the adjacent page, but the author’s recollections of why the trains were at the particular location when photographed, the operation of the particular train, and the individual members of the crew of the train.

One unique feature of the books is the lack of use of normal printer’s type: all of the written text is in the author’s excellent handwriting, which makes seem each book almost like a personal letter to the reader.

Volume I begins with the author’s first contact with railroads at the Santa Fe station in his hometown of Climax, Kansas, on the Howard Branch in 1944. His family soon moved from Climax to Eureka, Kansas, where he was introduced to the Missouri Pacific.

Family vacations afforded Mr. Burke the opportunity to photograph steam power of other railroads such as the Frisco, Katy, Rio Grande, and Union Pacific.

As he progressed to the end of his high school education in 1951, his personal adventures in pursuit of the iron horse covered an ever-widening circle around his hometown of Eureka.

It seems that his frequent means of transportation was “riding the rods,” but always in the company of his camera. After his graduation from high school, he followed the Union Pacific, photographing it across Nebraska and Sherman Hill to Laramie, Wyoming. Ultimately, he entered engine service on the Santa Fe. A deep disappointment was dealt him when his first paying trip as a fireman was on a 100-class diesel rather than on a steam locomotive.

These volumes provide an in-depth look at the operation of the Santa Fe in Kansas during the 1940s and 1950s through the end of steam. While the majority of the photographs are of Santa Fe power, the author has included a good look at the Santa Fe, Union Pacific, and Missouri Pacific, together with the Frisco, Rock Island, Katy, and Rio Grande (both standard and narrow gauge), and a few odd rods he encountered on his travels.

The book is hard to put down once you’ve started to read it. You may find the author’s early experiences quite similar to your own. These volumes should be in every rail fan’s library.

The Ironhorse & I is published by San Juan Publishing Group, Inc. Mr. Burke passed away in 2017; these three sets are the only remaining new copies of his books. His original negatives and photographs were donated to and archived by the Santa Fe Historical Railroad Society, as well as the depot museum in Eureka, Kansas, and the Durango Silverton Narrow Gauge Railroad in Durango, Colorado.

Mr. Burke’s books are a poignant, beautifully written collection of personal experiences and photos “amplified by longhand legends from the ’40s and ’50s as seen by a hobo kid and from the cab.” Author, James Burke tracks steam from the early 1940s to its present use on the Durango & Silverton Narrow Gauge railroad. All stories are hand-written by the author who also took the more than 600 original photos (most never seen in print before) in this wonderful set of two books. Included are stories and photographs of the Santa Fe, Missouri Pacific, Union Pacific, Rio Grande, Frisco and others.