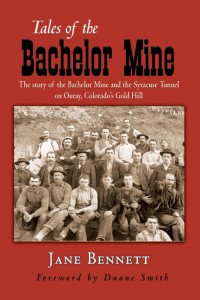 Tales of the Bachelor Mine. 2nd Edition

Softcover, 125 pages. At local bookstores or from San Juan Publishing.

“Tales of the Bachelor Mine.” Purchase book.

For author Jane Bennett, it was a tale that had to be told—despite the demands of work and home, and the occasional need for a good night’s sleep.

“I had to take leave time from work to do research,” recalled Bennett, whose book, “Tales of the Bachelor Mine,” has been flying off shelves from Montrose to Durango since its publication in 2005. “It’s something to work all day, and at 3 a.m. realize you are still sitting there, your body crumpled up from all those hours of sitting in the same position.”

After seven years of interviews, research, and sheer stamina, Bennett completed her project, an accounting of the mine that she grew to love while working in Ouray’s tourism industry and as a summer tour guide at the mine itself. The book includes a foreword by famed Western Colorado Historian Duane Smith.

While becoming an author has not changed her life in any dramatic fashion, the book is an accomplishment in which Bennett takes pride. “I was able to speak with several of our old timers, people like John Crim, Al Fedel, and Harry and Nick Peck,” she said. “Some of them have since died—so I am really glad I did this. And it is so very, very gratifying when people tell me that they enjoy it. One of my favorite authors is (historian) Barbara Tuchman—I want to write like her! So I like it that people tell me my book is engaging.

“I was not after boring and dry,” Bennett said. “I appreciate the lives of the miners and their families, and I love history—I really do.”
During the years of preparation and work, Bennett found herself immersed in what almost amounted to a second community—the Ouray of times past, a vivid world in which even four-footed citizens acquired personalities larger than life.

“So much of my research was done in the basement of the library, in a back room,” she said. “I was reading old issues of the Solid Muldoon—Dave Day’s personality was so strong, at times it was almost like having an affair.”

Other personalities that Bennett came to know were Bachelor mine owners George Hurlburt, Charley Armstrong, and J. Frank Sanders.
“They were not money-grubbing mine owners,” she said. “They were admirable guys. I am really glad I got to know them.”
In an industry where job satisfaction depended greatly on the mine at which one worked, the Bachelor Mine, opened in the 1880’s, was unusual, she noted.

“Ouray was always blessed with progressive mine owners, people like (Camp Bird owner) Thomas Walsh and George Hurlburt, Charley Armstrong, and J. Frank Sanders,” Bennett said. “A mine supervisor was once quoted as saying, ‘men are cheaper than timber,’ but the Bachelor was not like that. They treated their men as well as they could.”

The color cover of her book shows a photo of Bachelor miners from 1890. “You can tell from the expression on the faces of the men, they were a happy bunch of guys,” Bennett said. “They had their dogs, and they made jokes for the camera. You can tell they liked what they did—the Bachelor Mine was a good working environment.”

Because the mining boom came late to the San Juans, life was very different than it had been in earlier boom and bust communities. “There was more expertise in mining, and the guys often came here in advance of their families,” Bennett said. “The Bachelor owners established a town called Ash, a nice family town with civic life and a brass band. It was a very close-knit community.”

Included in that community—and in Bennett’s book—are four legged creatures whose contributions to the quality of life cannot be overlooked. “There were animals in the mines,” she said. “Certainly there was some abuse, but the majority of mules and burros were miners’ pets—if they did not have a mule or burro, they had to haul the heavy tram cars full of ore by themselves. So it was natural for the miners to show their appreciation with treats. When the animals saw someone approaching, they came to expect treats,” she added. “If you didn’t give them one, they had ways of making you pay.” Other animals of importance to local miners were rats—according to Bennett, an old saying notes that, “when the rats leave, the miners go with them.”

“Sometimes the relationship was very close,” she said. “There were even stories of a rat pulling on a miner’s pant leg to make them leave.”
Ring tail cats were also prized by miners, not only for their ability to catch pests such as mice, but for their sensitivity to noxious fumes, which provided advance warning to men in the mines.

The Bachelor mine’s importance to the community of Ouray grew, as it acquired a reputation for being safe and well run, and because it was close to town. The mine remained open throughout the hard years of the Great Depression, making it possible for miners and their families to ride out the rough times.

“That was huge for Ouray,” Bennett said. “The owners made a conscious decision to remain open during those years, although they didn’t make money. This was certainly one of the best silver mines Ouray ever had, long-loved and reliable.”

Although the Bachelor mine today is known more for the tours that have become popular with locals and visitors alike, active mining could resume with a “mere 30-day startup period,” according to Bennett, who notes that some of the Bachelor Mine’s appeal lies in its exciting and mysterious appearance. Much of the mine itself remains shrouded in mystery despite the tours that take visitors 3,350 feet down into the heart of the Earth.

“So extensive are its workings that no one really knows for sure how many miles of them there are,” Bennett wrote in her book.  Like many of the miners of whom she writes, Bennett will most likely not strike it rich with her book. And yet, she is pleased to share the story of Ouray’s Bachelor Mine, the minerals extracted from it, and the lives of the early miners with readers of all ages.  And besides, wealth can take forms other than silver and gold.

“I have always wished I could live in the 19th and 21st centuries simultaneously,” Bennett said. “And in Ouray, you can.”

Formerly a resident of Ouray County, Colorado, Jane Bennet Wright now lives in Cambra, Australia. She is a professional storyteller and musician as well as an author.  Her repitoire includes Cowboys, Rodeo & Ranch Life, Indians & Native American History, Mining Legend & Lore, and Romantic Tales & Ghost Stores. She is available to speak with groups and organizations of all kinds. To schedule a storytelling event, or for more information, please contact our editor.