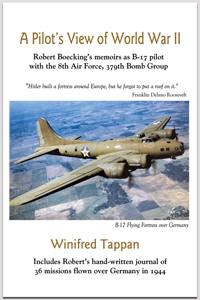 A Pilot’s View of WWII

Softcover, 106 pages. $17. At local bookstores or from San Juan Publishing

“I found that journal entries gave great insight into the day-to-day lives of those who fought with the 8th Air force during the Second World War. I also thought the author’s notes do an exceptional job of clarifying and elaborating on Boecking’s story.”
— Alan Renga, Archivist. San Diego Air & Space Museum.

“A Pilot’s View of World War II, based on the hand-written journal of Robert’s experiences as a B-17 pilot, is an inspirational read. The pages in his diary, including descriptions of his 37 missions over France, Germany, and Czechoslovakia from September to December 1944, accurately reflect the incredible dangers, moments of terror, and unbelievable courage of those young men who flew those Flying Fortresses through ground flak and fighter planes to reach their targets. If you want to truly understand how the war looked from the cockpit of a Flying Fortress through the eyes of a 22 year old Nebraskan, knowing that any mission could be his last, A Pilots View of World War II is a real treasure.” [Read full review]

Tappan is an inspirational late bloomer and proof that it’s never to late to follow a dream and change careers! She went back to college when she was 50 and earned a Bachelor’s Degree in Education. At 55, she earned her Master of Arts Degree. At age 87, Tappan published her first book. This is her third, and she’s already at work on the next one (which explores the end of WWII in Japan – from the deck of a ship! “In the process of putting together my books,” Wini said, “I discovered that I really love to write and wish I had not waited so long to start.”